In my game, Andrew seemed determined to lose on time despite having the better position. I was 30 minutes ahead, but despite this, on both moves 56 and 57, I missed a mate in one with Rxh2#. Ay Caramba!
Good wins for both Richard and Bill.


A pleasant evening at the Red Admiral finished with a drawn match and both teams at the bottom of the table.


Here was my game against Andy Johnson.

HA3 Not Bottom of the Table Anymore.


Last night, HA3 took its first step towards its main mission for the season - namely finishing above Red Admiral in the table. Gordon, our non-playing Captain, had a plan. Hooray - a point!

My game below against Charles Eastlake was rather sharp.

After round 4, I was on 4 points, but could still be caught by Granville Hill and Les Corlett - both on 3 points. For round 5, I was drawn with the white pieces against Granville. In order to retain the Minor title I would have to at least draw. If I lost, I would have had to playoff against Granville; and if I lost and Les won, there would have been a playoff between Granville, Les and myself.

I had played Granville twice before. I had been white both times and Granville had played the Sicilian both times, so I had spent the last week preparing for a Sicilian. This turned out to be a waste of time since, on the night, he met e4 with the Scandinavian Defence.

Things started badly. I made poor opening moves, moved my queen twice and allowed my king to get stuck in the middle of the board with a centralised rook and queen bearing down on it. Granville had an active position and things were not looking at all good for me.

On the next board, Les demolished Charles Eastlake in seven moves.

Fortunately for me, Granville blundered on move 16. He had meant to retake my bishop with his rook, but picked up his knight in error. This left me a piece up and I was able to hang on.


Also in the Minor, Ray won against Harry Kershaw; and Gordon's opponent did not appear.
John lost to Jim Bingham in the Challengers and this sealed the section for Jim.

Heathcote play in the 5th round of the Harrod at Ashby on the 14th.


A bad day at the office. Rapidplay, so unfortunately no moves recorded.

Well done COLIN  4 wins I think you have retained  the  cup
Posted by Ray beach at 17:26 No comments:

I am not around on the 10th, so John Oliver and I played our 4th round Minor game at the Heathcote Arms on Tuesday. Ray came down to watch.


Following wins in the first two rounds, we faced a perfectly selected 500 grade Ashby team on Tuesday. It looked very much like we were going to lose until John pulled off a quite excellent save with only seconds left on his clock.

On Thursday, several of us were in action in the CCs at Wigston. Ray beat Gordon. Bill lost. Graham S won. I beat John McKiernan, who I last met in the play off for last year's Minor.

Already knocked out of the Chapman Cup, things did not go any better in the Birstall. There was no handicap. I lost early to Peter Hickman. Game below:


Ray then lost too. John won, but then Mike was in time trouble in this position with the black pieces. Mike took the pawn on g6 and lost to h7 - it cannot be stopped. Can you see anything better for black? 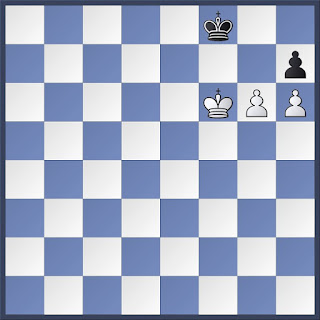 Tuesday, we are home in the Harrod against Ashby and on Thursday it is the County Championship.

CCs Minor (Round 2) Bill Vs Colin

In Round 2 of the Minor, Bill and I were drawn against each other. I am not around next week, so we played our game early. I was up against it in the middle-game, but hung on. After white's 23rd move, we were equal on material and Bill offered me a draw, but by then I felt I had the edge and was able to convert the point.


Afterwards, we watched the exciting 0 - 1 conclusion of Graham Sharpe Vs Shabir Okhai in the Open. Graham B was around too, playing Sherif Gonem, but I did not get to see any of that game.

Next Thursday, in the Minor, Ray plays Andy Carter and Gordon plays Paul Martin and John is down to play Jez Wells in the Challengers.


The first below, was my final league game of the season. Kirby Muxloe 3 Vs HA3. I am afraid that I mis-recorded a few moves and even with the aid of opponent's score sheet, I could not quite make sense of the ending. I have entered all the moves that I am certain of here.  What I can say is that I did have the upper hand with around 10 minutes left on the clock, and my opponent with 27 seconds, when I made an illegal move at around move 60. We put the clock back 2 minutes, and then my position disintegrated.


We finished the season in second place.

The County Championships have started. Ray and I know each others games very well and it is always difficult playing him.

Also in the Minor, Bill scored an impressive win against Andy Carter. Gordon had played well, but eventually lost to John McKiernan.

Hi would like to thank all the players  who played for the 3rd team  this season well done all of you 2nd was brilliant thanks ray
Posted by Ray beach at 10:32 No comments:

A Couple of Colin's Recent Games

I have not been around much for a couple of weeks. My two most recent games. First a draw:


The next was a technical king and pawn draw, but I still managed to lose. My first loss in the league all season. See if you can spot what I should have done to save the half point.


With one match to play, HA3 look set for second place in Division 5 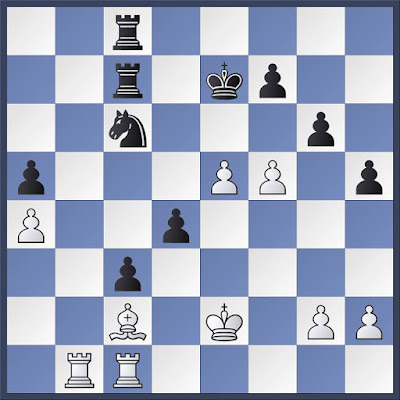 
Red Admiral are struggling a bit to get a team out at the moment and, unfortunately they had to default on one of the boards. This gave us a point, but left Gordon without a game.
Stan Parsons, with his make them up as he goes along openings, is always tricky to play against and this was too much for Ray on the knight. Bill was victorious with his opponent having refused an earlier draw offer. Mick made me work for it, but I was able to recover a win.


Amazingly, this result leaves us at the top of the table, whereas usually we are glued to the bottom of it.