One of our less good performances, although Dave managed to checkmate Mick Slater.

Our next League match is on Thursday 5th March away against Ashby 4.
As Littlethorpe D, in the D34 Cup (which we are still winning after three rounds) we will be playing away against Loughbrough B, our nearest rivals, on Thursday 26th March.

Littlethorpe 5 Draw Away at Oadby

On Wednesday, we travelled to Oadby with only three players.
Dave played board 1 against Don Candlin, i played board 2 against Mike Thornton, and Ray played Ted Williams. We defaulted board 4.

I managed to lose a piece fairly early on and after that i had difficulty in keeping anything together. After 32 moves, things looked like this: 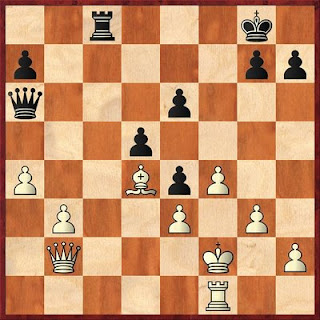 A bishop down with the black pieces, i knew that i was going to lose unless i did something immediately. I played 33... Qd3

34 Rc1 would have won for white, but instead, Mike played 34 Kg1 allowing me onto the seventh rank. 34...Rc2 and it was all over, 35 Qa1, Qe2 and White resigned unable to prevent the inevitable. I was very lucky to get away with this.

Dave had played well and the position had looked very drawish. Material was down to queens and pawns, when Dave put his queen on the wrong square leaving it en prise (Sorry Dave).

This left our hopes of drawing the match with Ray. It was down to rook and a knight each with the centre blocked with lots of pawns. Time was getting short for both players. Ted felt that he had the better position and was playing for a win, having rejected Ray's offer of a draw (which would have won Oadby the match). Players crowded around the table and the Oadby team watched powerless to say anything as Ted's flag dropped whilst he stared at the board. So, Ray won giving Littlethorpe 5 a draw and our first league point in quite a while.

Well done everyone. Next for L5, we are playing at home on Tuesday 17th against Red Admiral 2. 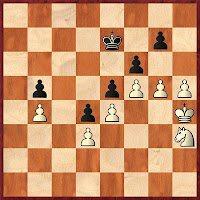