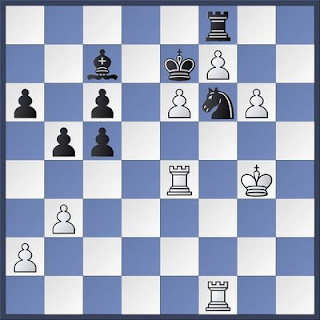 On Tuesday, we scored our third consecutive draw.

Fresh from a weekend of 4NCL games (and 7.5 hours of defending), Dave was in the mood for attack. This resulted in an early win. Ray then won against John Creasey, I lost against Stuart Hollingworth, and Alan lost out to Ron King in the endgame.

Outgraded on every board again - this was a decent team result and good wins for both Dave and Ray. Well done everyone.

This Thursday, as Littlethorpe D, we will be playing away at Loughbrough in the fourth round of the D34 Cup with everything (the Cup) to play for.

On Tuesday, at home against Braunstone, we scored another draw.
John Impey wasn't well - so Braunstone defaulted a board.
I lost after an attack went hideously wrong. Herve lost too. Aaron managed a nice win against Guy Closs.
The results were:

Ashby 4 played a stronger team than last time we met. As the only team below us in the fourth division, it was important that we did not lose. We played our left handed players on the odd numbered boards - a strategy that resulted in a draw.

On Tuesday 10th March we play at home against Braunstone 4 - we drew with them last time.

oops - Herve is left handed too
Posted by Colin at 12:03 No comments: