Merry Christmas to all From ray beach

I did not really get to see anyone else's games. My win against Brian Wood was a struggle.

This was a really good result for us:

Ray was material up, but drew against Mike Thornton with this as the final position. 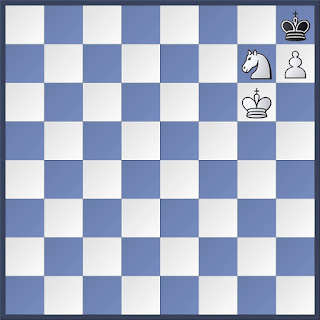 Don Candlin had me nailed to a cross, but let then me off.

John ground out a win.

HA3 draw away at Red Admiral.

Here is Gordon's win against Stan the main man Parsons. 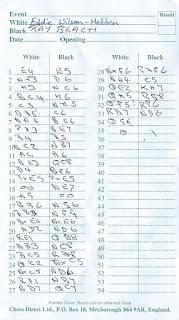 Congratulations COLIN well played  hope your form keeps up for the new season 😀
Posted by Ray beach at 13:40 No comments:

This was a 40 minute game with a 10 second per move increment from the start. This was way too much stress for the both of us. Thank you to Ben for recording the final moves.
Posted by Colin at 20:33 No comments:

John McKiernan - already on 4 out of 4. Me with 3 out of 4. John has won this competition before.

In round 2, it all went a bit wrong against Andy Carter. There were at least 61 moves, but my notation leads a bit to be desired and it stopped making sense at around 27 moves in. The writing looked to be on the wall by then, however.

I seem to have hit a rare run of form over the summer. Here was my first round Minor game against Charles Eastlake. At 119, Charles looked to be the strongest in the competition. In our previous game, in March 2016, I had resigned after 18 moves.

Heathcote 3 has had a good year thanks to our enthusiastic players and our team captain Ray. We have one game to play against Melton 4, the last game of the season for us. Our last game was against Kirby 4, we played 6 boards and managed to win 4 - 2.

A little bit of humour: We played a game against Syston on 8 March 2016, I was playing board 4 against Rob Mundy. We were tucked away in the corner of the dining room at the Heathcote Arms when suddenly water came pouring from the ceiling above fortunately it missed the board and the two of us. It brought all games to a halt with humorous remarks until we moved positions and play resumed as normal. Apparently Tuesday night is bath night.