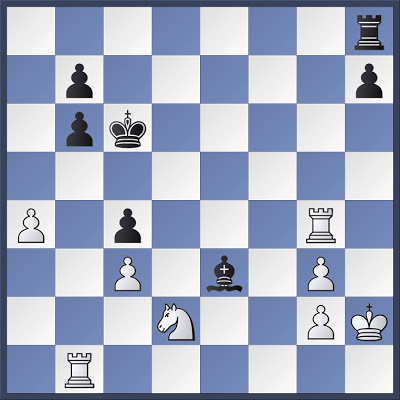 Congratulations to Drew on winning the Under 13s Section.

HA2 (We only have one team, but we asked to be known as HA2) will be playing at home to Wigston on Tuesday 21st.

We play away at Hinckley on Thursday 23rd.

We play away at Wigston 2 on Thursday 23rd.

Here is the game that Mick and I played at Wigston last night. This had been postponed from two weeks ago. Wigston were holding their AGM upstairs, but they kindly allowed us to use the bar:


HA1 will be relegated to Division 2 following its final league match loss to Shepshed 2.


Our final standings are as follows:

As usual, HA3 was stuck, like a postage stamp, to the bottom of Division 5 (although, we did have a few wins).

The Minor results from the previous week have not been published yet (perhaps because I have not yet played my game against Mick Slater), but I understand that Ray drew against Paul Findley.

This week, I was drawn (with the black pieces) against The Grinder - with predictable results:

On the same evening, Graham S played with the white bits against Rajan. I am told that Rajan won.

One of the last games going, was Mike Salisbury Vs Paul Deacon. R & K Vs R,K & P. There was a long struggle, but Paul was eventually able to convert the point.

No matches this week - maybe a few casual games at the Heathcote tonight, although Ray is otherwise engaged, and I probably will not be able to get there.


Four stone smaller and almost ready to run a 5K Boss.
Posted by Colin at 11:48 No comments:

This week's news and a game from Gordon.

HA1 plays its last remaining league match of the season, on Tuesday, in what will probably be a relegation play off against Shepshed 2.

Two of the four sections began in Wigston last Thursday and the remaining two sections begin this coming Thursday.

Gordon has sent in one of his internet games from Gameknot and asks for constructive criticism of his play:

Good Luck to our first team,