The team was picked well in advance for the match against Scrappy Valley but my only concern was Brandon. He had returned from America only the day before and would play if he wasn't jet lagged. I texted and emailed mum but no reply, so I lined up Pete Harrison as deputy Wunderkid! As it was, contact was re-established with the Clarke household and Pete was off the hook. So off to Netherhall for another tight (on paper) encounter.
Brandon was late, but he always seems to be! But where's Graham Sharpe? He's nowhere to be seen, and I don't have a phone number for him with me! The of course (and all captains will know what I mean) those thoughts run through my head - I did email him, didn't I? He did reply, didn't he?? I even rang Graham Booley and got GS's home number but no reply - he must be on his way. Fingers crossed anyway!
So onto the match. Graham didn't arrive, so we were 1-0 down at the start (later, I received an email apologising as something had come up at school at the very last minute – these things happen). My game lasted barely 45 minutes. I'd like to tell you that it was a brilliancy of such magnitude that I must post it here for all to see, enjoy and learn from. I'd like to say that, but sadly the truth is that my opponent simply put a piece en prise! Not 15 minutes after I had finished than so too had Brandon. Poor Ray Burgess had been well and truly put to the sword. The following position occurred after only 15 moves and Ray (white, to move) is completely busted. 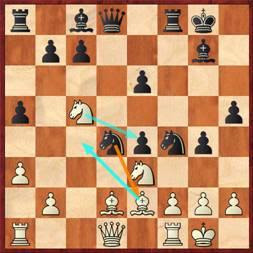 In desperation he played Bxg4 and after the natural ..hxg4 Ray played Qxg4 no doubt hoping for some counter-play against Brandon's king. So, can you see what happened next? (answer at the bottom).

Dave Bray against Roland Graf was an interesting battle which ended up K+R+2P v K+R+2P with the pawns on opposite wings. Roland had to give up his rook for one of Dave's pawns as both sides queened. Dave tried to keep his rook with tempo by giving a check but ended up losing it to a fork, and the resultant Q and Pawn ending was tricky but ultimately lost. Fritz later pointed out that the draw is achieved trivially by simply moving the rook to safety first, then sacrificing the rook for the remaining pawn at the earliest opportunity to leave K+Q v K+Q. A good lesson to learn!
So, it all rested on Mike Cowley v Mick Tate. Mike looked to have the better of things but then Mick got some activity. Suddenly Mikes king was chased to b4 and a mating net looked like it was closing in. Mike was able to punch a couple of holes in that but the game was certainly double edged. With little time remaining a draw was agreed in an interesting position.

A drawn match in a good, close competitive affair. Let's hope they're all like that!

The answer in the Burgess-Clarke game is that black played the devastating ...Nde2+ when, after Kh1 the simple ...e5!! white's queen has lots of space around her, but no safe square to move to. Oh dear.
Posted by Sean Hewitt at 13:09 No comments:

A tight match, which we just lost out on.
Posted by Littlethorpe Chess Club at 12:53 No comments:

The team was carefully picked and selected, and travel arrangements made well in advance.  All this went up in smoke on Tuesday afternoon however when two players from other teams became unavailable, and we had to do some re-juggling of teams!  As it was, this meant that we travelled to Nuneaton with a stronger team that anticipated and, against the weakest side in the division, we were more than a match for them.  Dave Bray's opponent couldn't resist a piece sacrifice on h7 which was unsound, although Dave had to defend carefully.  Alan Byron seemed to pick up the wrong piece on move 1 when he played e4! but got a crushing kingside attack and was winning from an early stage.  The captain let the side down with a draw.  I sacrificed a pawn for position but my opponent was happy to take a draw by repitition and I wasnt going to play a worse move just to avoid it.  Dave Farrall and Alan Edwards both achieve material advantages and ground those advantages out for a point.
So 4 matches, 7 points.  A rest next week and then we play the three strongest teams University A, Nuneaton A and Coventry A in successive weeks.  Should be interesting!
Posted by Sean Hewitt at 10:41 No comments:

Following last week's 3-1 defeat to Oadby, Littlethorpe 5, this evening, won their first match of the season, at home, against Ashby 4.

Dave won very quickly, Herve scored a well deserved win, the Captain blundered away his queen and the game from what had been a decent position, and Ray won his game convincingly giving us the match. It was all over before 21.30. Well done to everyone (except me, obviously).

We have now had, 1 win, 1 loss and 1 draw. The loss and the draw being to teams we were heavily outgraded by. Our next league match is away against Syston 3 on 11th November but before that we have our first league cup match on 4th November, also away at Syton.

A tight match on paper and so it proved over the board.  Boards 1, 4 and 5 were always tight and all ended drawn.  Mike came second best in a very sharp tactical battle with Paul Colburn, leaving me needing to win to save the match.  We should have drawn as I should have won on board 2 but I misplayed my sacrifice, as I seem to do with everything these days!  In the end, I wasn't so much lucky to draw but Jim must have felt sorry for me and gave me a draw even though I was totally busted!
Posted by Sean Hewitt at 13:14 No comments:

We did not score any points :-)

Posted by Littlethorpe Chess Club at 13:04 No comments:

Having performed well on the Saturday, the big question as always is will our team survive the night.  12 headed off for a curry, 8 walked to the pub afterwards.  Three were left there early the next morning muttering about taxis, nightclubs and Ascot!  Hmmm.....
As it was, all 18 turned up to do battle the following morning - some looking better than others it must be said!  The draw had been kind to us.  The first team had FCA Solutions 2, the team that drew with the 2nd team the day before.  The 2nds in turn had the 1st teams victims of the previous day whilst the 3rd team played Celtic Tigers 2 which on paper looked like it should be close.
Posted by Sean Hewitt at 15:37 No comments:

Another 4NCL season is upon us.  This year, with more players wanting to play we have stretched to three teams.  Although this is a push, especially for the first round at Sunningdale it has been made possible by one or two players volunteering to help out in the first weekend.  The first team has been strengthened with the inclusion of FMs Andy Smith and Manuel Weeks, as well as British Major Open winner John Sugden and should be real promotion candidates this season, if only we could ever win two matches in a row!  The draw pitted
FCA Solutions 2 v Littlethorpe 2
Warwickshire Select 2 v Littlethorpe 1
Bristol 2 v Littlethorpe 3
As it turned out, the first team heavily outrated their opponents, the seconds were evenly matched and the thirds were outgunned.  The results were

The first team wussed out big style, leaving it to John and Alan to bring home the points.  Special mention must be made of Graham Hewitt.  Playing due to illness to another player, he showed great endgame technique to win a tricky rook and pawn endgame.  And it wasnt just me who thought that - Steady Eddie said so, so it must be true!

So, we playing University B, perennial strugglers in the Coventry League.  As it happens, we have a much stronger side than the one that we beat Rugby with two weeks ago so this is going to be a bit one sided insn't it?  Then University arrived.  First I saw Chris Russell (graded 180).  Then I saw Tom Pym's name on the score sheet (192).  I said to Steve Turvey (University player as well as Littlethorpe 4NCL regular) "I thought we were playing your B team!"  Thats when he explained that they had recruited some good new players this year so had decided to run with two strong sides in division 1 instead of a strong and a weaker side.  Good for the league certainly, tough for this match!
So, the game starts and despite Mike Salisbury playing there are no early finishes.  Its gone 9pm before the first result is in, a nice win for Alan Edwards.  Then Mike draws (although he doesnt count this as a draw - apparently it was his opponent that made the offer!).  Alan Byron is two pawns up in a nice position and converts the point - a good win against an improving youngster - leaving Brandon and Graham Sharpe playing.  Both games have plenty going on but end up as draws to give us a nice win against a team that will take points off of other teams.
Posted by Sean Hewitt at 09:10 No comments:

On Tuesday, Littlethorpe 5 began its mission to conquer the fourth division. Away against Braunstone 4, we were outgraded on every board, but managed a respectable 2-2 draw.

A fine start to the new Coventry League season saw the A team win 4-1.  Not that it was really as easy as the scoreline suggests.  We were soon 1-0 up when Sean's opponent missed an intermezzo and lost, then Brandon's opponent got a draw by repetition in a R+P ending.  This left Alan Byron with a tight game, Dave Bray with a slight advantage and Pete Harrison a pawn down for very little.
Alan agreed a draw, Pete's opponent blundered a piece and Dave won with a very nice mating net.  Well done all!
Posted by Sean Hewitt at 12:49 No comments: