Congratulations to Rob on winning the Major Section of the CCs.

First, his fifth round game from Tuesday against John Daniel with annotation by Rob.

Rob - who was slow to start scoring points in the competition-  followed this up, on Thursday, by demolishing David Reynolds, in the last round, with the black pieces, in the Kings Indian variation of the Pirc Defence.

At this point, i was still playing for a win against John which if it had come off would have forced a play off between myself and Rob. It was not to be, however. 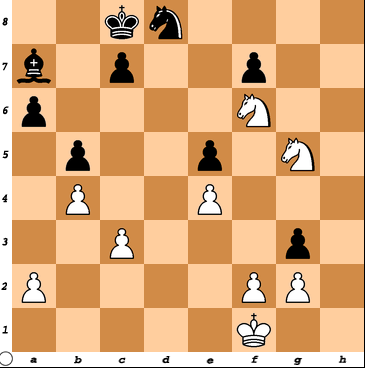 I had the white pieces. John had just played 31...g3. Instead of playing 32 fxg3 - winning a pawn, however, i played 32 f3 putting the pawn on a white square out of reach of John's bishop thinking i would have time to bring my knight to h5 and then take on g3. Instead, John was able to get his bishop to e3, then d2 and things deteriorated for me on the queenside and i did not last much longer.

Unfortunately, i did not see any of the other HA players' games. I know that Haka Dave lost, in the Minor, to an in-form Dennis Wilkins. Once i know what the rest of the results were, i will put them in here.

Tuesday
HA1 compete at home in the last round of the Wylie and stand an excellent chance of winning the cup.
There may be some friendlies, too.

Wednesday
HA2 competes away at Loughborough in the last round of the Harrod where we have an excellent chance of winning the wooden spoon.

Thursday
The second to last round of the Minors, at Wigston,  in which Ray will be playing with the black pieces against Guy Closs. There will be a lot of interest in this one.