Last night we trekked over to Latimer to play the Minor League Cup.  Things got off to a good start - Ray managed to avoid crashing into anything on the way.

On arrival, as I was playing Board 2 I ensured (as acting unofficial Vice-Captain) we lost the toss, but Mick Garland chose Black on odds, so my cunning plan failed

As my game was the last to finish, I didn't see any of the other games, but Ray, Gordon & I were outgraded.   Gordon succumbed to Rich Davis, Ray lost too, and the Grinder, continuing his good form from his weekend on the Yorkshire Coast, won.  Unsurprisingly, I lost to Mick Garland, but at least I wasn't bust after a dozen moves.

Given  the grading difference we had a two point start, so the match finished as a 3-3 draw.   It seems the Conservative Club has sold their car park and installed a heating system.  Mick G even suggested that it was warm, and disrobed somewhat.  However, the bar, after the match, still resembled the Marie Celeste.

To do a Biggg Boss, Well done everyone. To do a Hacker, Some more than others.

On a different note: 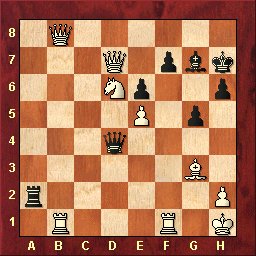 This is from a game I've recently played through.

Black to play and neither player is in time trouble.

A (VERY SMALL) PRIZE TO HOWEVER GETS THE CORRECT ANSWER FIRST...

All will be revealed in a few days time, if no-one knows.